A Brief Memoir with a Point

When my dad passed away around 30 years ago, I was thrilled to find some of his writings in an old suitcase.

It wasn’t a suitcase full of manuscripts or anything like that. The suitcase was an old two-tone brown pressboard affair. It had a kind of fishnet container stretched across the inside of the lid.

And inside that fishnet area were a few poems typed on an old manual Remington.

Dad never talked about writing or having written. But the poems were very good. They were wittily written bits about various topics. They would have sold easily to magazines, but he never even attempted to submit them for publication.

He was a very intelligent man but, like me, he was born with one foot in his father’s generation and one foot in his own. For him, any kind of literary or artistic accomplishment was a possible (even likely) source of embarrassment.

But to me and a few others, those poems were wonderful. Not only because they were good in their own right and not even because he was my father, but because they provide an insight into this man that he seldom or never allowed others to see.

I found myself wishing fervently he had written short stories. Just to give me a deeper glimpse.

This morning we experienced a great sunrise. I took a photo of it, and realized it lent itself to an inspirational meme. 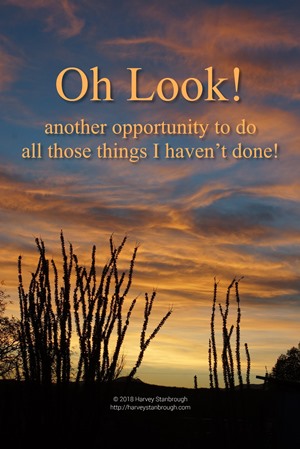 So I imported it into a program I have, slapped a few words on it, and created a meme. That’s it on the left.

And I’d no sooner posted it to Facebook than I realized my new writing goal: to get as much of my fiction “out there” as I can while I’m here.

The stories themselves don’t matter. Nor does it matter whether I write them in sprints or trickles. All that matters is that I write them.

In all of those, I was “on” in one form or another. I was playing a role and doing what was necessary in whatever positive way I could. And in each of those, my own legacy is shared with and informs the legacy of others.

The fourth legacy is my writing. That is the legacy that drills deepest into the truth of who I’ve been and who I am. And because I’m an adherent of Heinlein’s Rules, it’s also the one that is least a composite. It’s pretty much all me.

And with the revival of self-publishing, and especially electronic publishing, in this wonderful new world, it will also be the longest lasting. Whether that’s a good thing is for the readers to decide.

Hence the meme. Each morning presents us with a new opportunity to do the things we haven’t yet done. To make our lives matter. To add to the legacy we leave behind.

For me, that’s a renewed dedication to learning the craft, and a renewed determination to write all the stories I haven’t written yet. Guess I’ll get started.

I wrote today, and I’m still writing as I post this. (Took a short break.)

A few days ago, I eeny-meeny-miny-moed my way through four or five works I’d started that had then stalled. Some of them reached all the way back to 2017.

I found one that grabbed me, read the first few paragraphs to set the idea in my mind, then deleted it.

Then I started writing a fresh story with that idea in mind. I wrote a couple thousand words on Friday, and maybe a thousand on Saturday. Yesterday I literally did nothing at all, writing or otherwise.

Today, after the stuff I wrote above, I opened the file and started in on it. From 9 a.m. until about 15 minutes ago, I wrote around 3500 words, and after I post this, I’m going back to it.

Keep Coming Back is an excellent technique. But it isn’t much good if you don’t start in the first place. (grin)

See “5 Steps to Prove You’ve Been Plagiarized” at http://www.thepassivevoice.com/5-steps-to-prove-youve-been-plagiarized/.

See “… or Lunch in NYC with Lee Child….” at https://www.leelofland.com/big-news-your-name-in-craig-johnsons-next-book-or-lunch-in-nyc-with-lee-child-and-more/. It’s a raffle. Good luck!

See “Why Amazon is deleting your reviews” at http://eepurl.com/dBDCHb. (Reedsy)

See “David Farland Joins the Master Class” at https://www.deanwesleysmith.com/david-farland-joins-the-master-class/. This is going to be one hell of a class.